I had only been to Keith and Belinda’s home once before and Belinda had been out walking at the time.  Keith had picked up the binoculars by his chair to trace her path up the nearest mountain. He expressed his discomfort about her walking alone on what could become dangerous ground and her name in his mouth was a precious thing. After a chat, we had gone out to his various sheds and outbuildings so he could show us his collection of engineering, electronics and interesting historical objects. The men enthused together while I daydreamed. They were conscious of, but also avoiding the question of what would happen to all this stuff when Keith was less fit.  He was already stumbling slightly over uneven steps and roughly-made paths.

Now, on hearing of Keith’s death, Ralph mentioned that we ought to go and visit Belinda, “to make sure she’s ok”.

There were lots of signs of activity on the way up the drive.  Piles of junk stacked neatly at intervals along the neat grass verges.  Large boughs from a now neatly-shaped tree lay on the ground, ready to be cut into firewood.  A new-looking car near the front door.

A wiry figure wearing overalls and ear defenders was attacking an area of land with a strimmer.  From behind, it could have been of any gender.  Ralph shouted, loudly, to let him/her know we were there and the strimmer operator took off his/her earmuffs to show short, thick, steel-grey hair in a precise and fashionable style.  She turned to give us a welcoming smile.  “Go in and I’ll get you a cup of tea.”

“We don’t want to stop you in the middle of a job”, said Ralph.

“No, no; it’s probably time I stopped, anyway.  The house is a mess, as usual, please excuse it.”

We pulled back the ranch slider and walked straight into the large lounge.  There were healthy houseplants amongst piles of old boxes.  A couple of amaryllises that had finished flowering were waiting to be re-potted or moved.  A few boxes and bits of wiring sat on the exposed beams of the high ceiling.  I moved a blanket made of hand-knitted squares so that Ralph could sit at one end of the sofa and pushed a bit of faded fabric to one side so that I could sit at the other end.

Our hostess was sloughing off her overalls at the door.  Underneath, she was wearing a sleeveless T-shirt and an overlarge pair of shorts.  Her legs were corded with age, but brown and strong as tree-trunks. Her waist was as skinny as a teenage boy’s, but the little shoulders were square and her arms, with their smooth, elegant muscles, were capable and hard. She stepped over the discarded overalls and set off on the next task: sorting out hot drinks for us and searching for biscuits.

In spite of the clutter, the room was welcoming.  Two of the walls were almost entirely glass, and from my seat, I could see part of the garden framed by the veranda, and beyond that, the mountains, beckoning us to taste the freedom of their constantly changing moods.

Ralph enquired in what he thought was a tactful way about Belinda’s plans. She turned her observant eyes on us as we chatted, to appraise us individually and as a couple. She told us what she intended to achieve and listed the ways she was going to continue her life in this new stage.

How it came about

This piece is based on a real person and a real situation, which happened when I was newly immigrated to New Zealand and negotiating a newly revived relationship. I was interested in New Zealand women and how their freedoms differed from those of British women. I had read how the cut of high-street fashion trousers for New Zealand women differed from that of British trousers because of all the sport and physical activity that New Zealand women partake in. The article I had read claimed that New Zealand women typically have smaller waists and bigger thighs than British women. I saw this, along with the references to androgyny I included in the piece as an expression of New Zealanders’ freedom from socially imposed femininity. I was also interested in how older women can remain attractive, in defiance of societal norms that expect only younger women to be pretty.

I knew what had happened and the points of interest that I wanted to draw attention to in the developing story, but I knew I had to hold back and leave it to the collaborator to interpret what was there: essentially a description of a woman and her home, and to develop a plot. I hoped that it would be a good starting point for a “what happened next?” exercise, especially as it raised a number of questions derived from the various tensions between her appearance and the conventional politeness of offering guests a drink, the evidence of feminine preoccupations like fabric crafts and houseplants contrasted with the bits of wiring on the beams and then the clutter contrasted with the freedom of the mountains. These tensions invited the reader/collaborator to resolve them. The word “freedom” already overtly introduces the theme of freedom, hinting at how those tensions might be resolved.

As an ex-teacher, I was used to encouraging my students to consider genre, audience and purpose. I was not sure whether the audience would be exclusively New Zealanders, in which case I should probably use the brand name “Weed Eater” rather than the generic “strimmer”. In the end, I did what came naturally to me and called it a strimmer, which also avoided the necessity of dealing with clumsy repetition if I had made the phrase “attacking the weeds with a Weed Eater”.

In a way, the writing had already been subjected to a collaborative process. I had read out a first draft of it at the writer’s circle that I am a member of and the circle made three observations. One person did not know what a pixie-style haircut is. Another did not understand what I meant by long-muscled arms: because I had read it out, the lack of punctuation in spoken word introduced some ambiguity. It was not clear whether the arms were long and muscular or the muscles were long. Thirdly, because I had described her legs as thicker than her waist, they imagined someone with an exaggeratedly pear-shaped body. I actually rather admired the woman I had described, so I felt this probably needed to be changed, but I chose to leave the piece unaltered before I sent it to the collaborator, partly to help me in the difficult psychological effort required in letting the piece go and affording the collaborator some freedom, and partly to reassure them that it was only a rough piece and they could confidently make changes to it. I thought my description was so poor, it would naturally invite them to make changes, and once they were in that frame of mind, further changes would naturally flow. On second thoughts, perhaps I should have made that clearer when I sent it to the collaborator.

I did, however, explain where I had originally wanted the plot to go. I thought carefully about this: I wanted to give my collaborator freedom to develop it her own way, but I just couldn’t let go of the ideas that had prompted my writing, so I outlined the plot in the accompanying email and offered some other ways we could collaborate.

When I became aware that the collaborator would not be adding to the piece, I made some changes to accommodate the writing circle’s comments. It also needed some structure, so I added a beginning that outlined a little background. The beginning included a reference to the mountains. They are mentioned again near the end, giving some circularity to the structure and emphasising the theme of freedom.

It is ironic that the story begins with the narrator and her husband making sure the character Belinda will be ok, as the ending confirms that she has made sensible plans and has the means to carry them out. By observing and assessing the narrator and her husband, she has taken away the control that comes with offering help and given the lie to pure altruism. The piece is still short, and there were other themes that I wanted to explore. I will probably work it up into a short story sometime in the future, probably with more dialogue, less tell and more show. 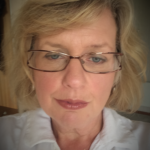 Pamela Calverley has a master’s in modern literature and taught English in further education colleges in England for several years. Some of those years were as head of English and as a principal examiner for an awarding body. Long before that, as a teenager, she turned down the love of her life. Six years ago, she had the opportunity to correct that mistake. It meant leaving the northwest of England, where she had lived all her life, and starting a new life on the other side of the world. Now, she is doing all the things she should have been doing all along, including writing.

She has a small proofreading business (head over to Facebook and look for Doc.DoctorPam). You can see an article she wrote about the importance of tone of voice on her Linkedin account (https://www.linkedin.com/posts/pamela-calverley-087083116_plainenglish-plainlanguage-clearcommunication-activity-6818353156326608896-tJH0 ). You can also see her monthly gardening blogs (upside-down gardening) in the inspiration section of the Gardenize app, or at Garden blog | Gardenize garding journal and planning app.

She has been commissioned to write the rags to riches biography of the founder of the largest cattle ranch in Canada.  She is an active member of a local writing circle, for which she writes poems, short stories and autobiographical pieces. She welcomed the opportunity to write a collaborative piece for many reasons. Roland Barthes, Hélène Cixous and others wrote some time ago now about how writing should be a generous, sharing, even motherly act, not a way to impose one’s own ideas on others. Pamela hoped that by writing collaboratively, she could gain a greater understanding of another person’s perspectives. Artistic endeavour can seem both selfish and lonely. To work closely with another person or group may present an opportunity to make it generous and sociable. How do you learn to write better? Ask a writer and let them show you how they write.